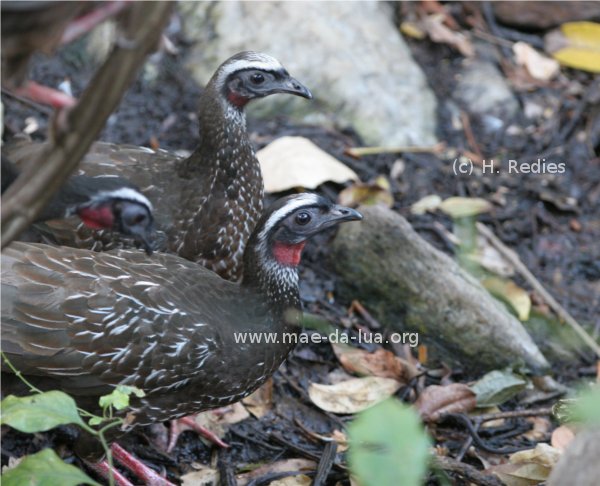 White-browed Guans at the waterhole in Mãe-da-Lua Reserve.

The species is monotypic and endemic of NE Brazil. 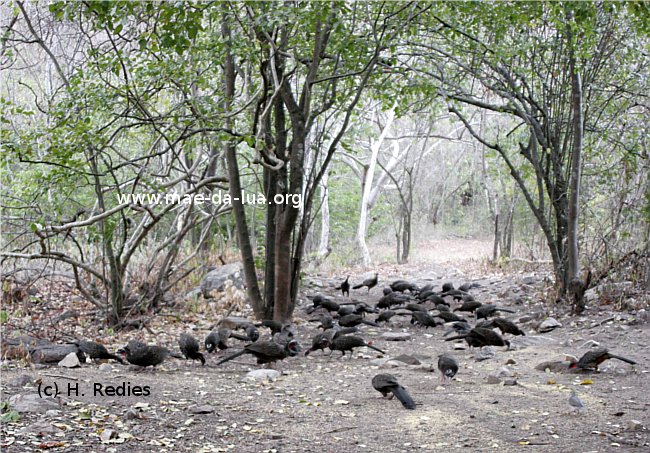 Soon after buying the land of Mãe-da-Lua Reserve in 2006, I noted the presence of White-browed Guans there. In 2007, I counted 16 individuals at one of our waterholes. In 2010, I regularly saw up to 38 White-browed Guans, among them many young birds, at the same place. In 2014, there were about 80 guans. I attribute the increase in numbers at least partly to our efforts to prevent hunting. 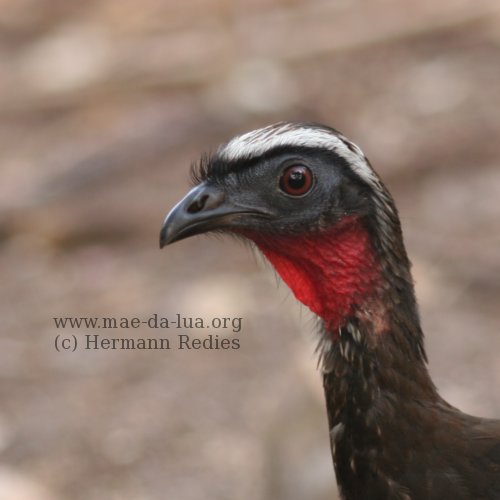 Figure 3. The photo was taken from a hide close to a waterhole, where a group of guans used to drink. This bird passed at 2-3 meters distance from my hide, in a fortunate moment where some sunlight made a photo possible.

Hellmayr (1929) wrote in his "Contribution to the Ornithology of Northeastern Brazil":

"P. jacu-caca is nearly related to P. ochrogaster ... and P. pileata... They form a natural group in the genus, characterized by the narrow black streak, separating the white superciliaries from the unfeathered sides of the head ..." (p. 474).

The photo above illustrates these characteristics (underlining in citation by me).

The literature about P. jacucaca is sparse, and some of it is difficult to obtain. Even the outstanding "Curassows and Related Birds" by Delacour and Amadon 2004 does not contain much material about the species.

Hellmayr (1929) considered the possibility that P. jacucaca could be conspecific with P. ochrogaster and P. pileata. Pinto 1938 treated the jacucaca as a subspecies of P. superciliaris. In the more recent literature, P. jacucaca is given full species status (Vaurie 1966, Blake 1977, Pinto 1978, Sick 1997, Delacour and Amadon 2004).

It has been suggested that P. jacucaca forms a superspecies with P. ochrogaster and P. pileata (Sick 1997, Delacour and Amadon 2004).

In RPPN Mãe-da-Lua, the White-browed Guan is regularly seen in secondary arboreal Caatinga and in the secondary dry and subhumid forest of the hills of the reserve.

According to Snethlage 1928a, the breeding period in northern Maranhão is in October and November (p. 554), and clutch size in eastern Brazil is 3-4 eggs (p. 573). Close to "Rio Grajahú" (probably Rio Grajaú in Maranhão), Snethlage saw in November a female with four recently hatched chicks. And in April in Piaui, he encountered half-grown juveniles (Snethlage 1928b, p. 680).

In Delacour and Amadon 2004, a half-grown bird from Bahia is decribed. The individual was "like an adult in appearance, but the plumage is softer, the colors somewhat muted, and there is some brown on hindneck and more brown on the breast than in the adult." (p. 137)

Other aspects of behaviour

In 1903, the ornithologist Otmar Reiser participated in an austrian expedition to northeast Brazil. In Piaui, he observed P. jacucaca frequently close to lakes, along river banks, or taking a "bath" in the sand of dry riverbeds. The birds passed much time on the ground, and, when a human approached, tried to avoid detection by crouching down in the sand. It seems that at the time, the White-browed Guan was a common bird, generally known, and much appreciated because of his tasty meat (Reiser 1923).

The White-browed Guan is threatened by extinction (IUCN Red List, Silveira 2008). The principal threat for the species is hunting, and the guan is now rare or locally extinct in most of its former range, also in regions where suitable habitat exists.

What could stop extinction of the White-browed Guan in the wild? One option are nature reserves, where the management prevents hunting, in cooperation with the environmental police CPMA and ICMBio. We try to do this in Mãe-da-Lua Reserve. As stated above, the number of guans in our RPPN has increased (count at waterhole: 16 individuals in 2007, 80 in 2014).

The opinion of Associação Mãe-da-Lua

The best measure to protect the White-browed Guan and other threatened species in Ceará is to prevent hunting not only in reserves, but everywhere in the state. A determined effort by IBAMA and/or Polícia ambiental CPMA to enforce the existing (!) law and stop illegal hunting in Ceará would be a tremendous contribution for the preservation of wildlife. Of course, it would be necessary that the government provides resources and political support.