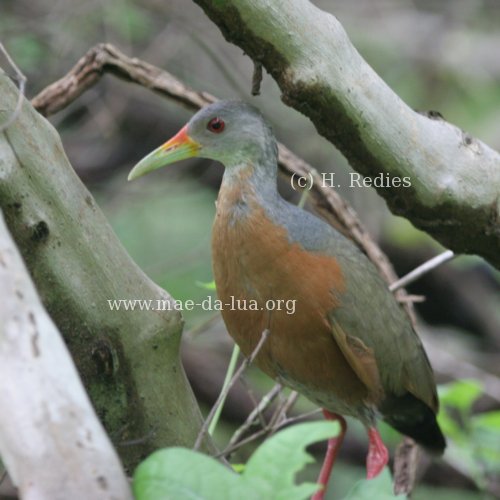 Little Wood-Rails normally stay hidden in dense vegetation, and are therefore difficult to observe. But sometimes, they come out of their cover to sing, like the bird on the photo. I made the picture an instant after it terminated its song.

Another Wood-Rail species, the Gray-necked Wood-Rail Aramides cajaneus, known as "Três potes" or "Sericoia", also occurs here. Talking to a local hunter, I noted that he was well aware of the existence of these two Wood-Rail species in our region. The birds are certainly at risk, because they are edible, and because their song attracts attention.

In the following, some brief information about the biology of A. mangle.

The chin and the superior part of the foreneck are light gray or white. The remainder of the foreneck and the breast are rufous. Crown, sides of head, and hindneck are gray. An important characteristic is the striking red-orange patch on the basal part of the maxilla (Fig. 1). See Mata et al. 2006, p. 162/163.

The Little Wood-Rail is known to inhabit coastal mangroves and closeby forests, and one of its Brazilian names is "Saracura-da-praia", which means "Beach Woodrail". However, the species also occurs further inland (Meyer de Schauensee 1970). In Mãe-da-Lua Reserve, about 40 km from the coast, the Little Wood-Rail lives in dense lowland Caatinga vegetation and in the dry forest of the hills, not necessarily close to water. The bird on the photo was observed about 300 meters away from the next water hole, in arboreal Caatinga.

I am not certain whether the Little Wood-Rails stay in the Reserve the whole year, or whether they leave during the dry season. My impression was that after a good rainy season, at least part of the A. mangle population stays in the reserve. The absence of vocalizations during the dry months does not necessarily indicate that (all) the birds have left.